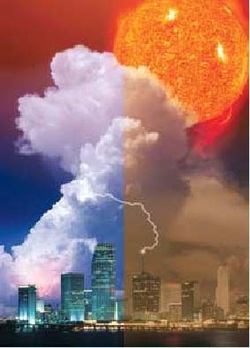 Throughout its more than 4000 million lives, the Earth has undergone many changes in climate. Only in the last two million have been alternating ice ages and warm weatherthat has affected so crucial to all forms of life on Earth and has brought great changesand even the disappearance of entire ecosystems, although the average temperatureEarth has varied only about five or six degrees between a season, and another. Without going too far in time, in 11,500 BC or 13,500 years ago is the same, there was aspectacular climate change, when the earth warmed and sea level went up, causing flooding, creating the Baltic Sea, the black sea killing all animals larger than a coyote of North America, all these events did not occur suddenly, but in a few hundred years.
By studying past climate from air bubbles trapped in pieces of ice in Antarctica and Greenland, through ancient tree rings and fossils and stalactites, sediments, etc.. It has been known, for example, the Sahara desert was lush vegetation and numerousstreams, that between 1550 and 1850 there was an especially cold period that has ended up being called Little Ice Age, in which such channels Holland remained frozenfor more than three months.
Even without having to go back as far back in time, we have data that show the influence of natural climate phenomena such as the eruption of Mount Pinatubo in 1991 whichbrought down several tenths of degrees the temperature of the Earth for more than twoyears.