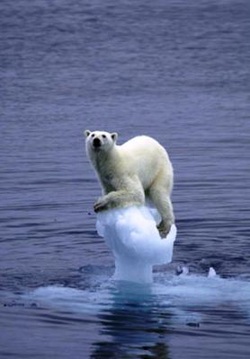 The energy we receive from the sun that reaches the upper atmosphere is composed of ultraviolet, visible light and infrared radiation. For when this solar energy reaches the surface of the Earth, has already been partly absorbed by ozone, water vapor and other components of the atmosphere, in addition to the vegetation, so that the energy that actually reaches the surface is usually 49% infrared radiation in visible light by 42% and 9% is ultraviolet radiation.
In short, about 30% of the energy received by the Earth is reflected and returns to the space, while the remaining 70% is absorbed, but not uniformly (is greater at the poles, for example) but there are some differences which produce phenomena convection air currents to transport heat, evaporation, condensation ... which produce the weather.
Depending on the amount of infrared radiation emitted by the Earth (240 W.m2), we know that its temperature should be about -18 ° C. But the truth is that the Earth has an average temperature of 15 ° C. The difference between the energy that equals the 15 º C and actually broadcast is being returned to space more slowly because it is trapped by clouds and some atmospheric gases such as carbon dioxide, methane and oxides of nitrogen, so These gases are called greenhouse gases. So the greenhouse effect is a natural and necessary as it is responsible for these 33 degrees of difference so beneficial to life on Earth as we know it today.
But clouds have another important role, as they reflect sunlight So given that it is estimated that the global warming by the greenhouse effect is about 30 W.m2, while cooling the reflection of of the radiation is 50 W.m2, it appears that the natural greenhouse effect is a cooling resulting 20 W.m2, against global warming produced by greenhouse gases produced by human action.
Other factors that influence climate are called forced mechanisms of radiation, which can be internal and external. External mechanisms occur at time scales of millennia and include variations in Earth's orbit, forcing changes between glacial and interglacial conditions, and even physical changes in the sun, as the curren sunspots every 11 years. The internal mechanisms are atmospheric composition, which changes are directly related to climate, especially in the case of greenhouse gases, as we mentioned before, and volcanic activity, as emissions of dust and gas eruptions are maintained for several years in the atmosphere and produce decreases in temperature.
In conclusion, the Earth's climate is tremendously complicated, because in influencing the atmosphere, oceans, ice sheets, living things and soil. That is, all matter and energy flows that occur on our planet.
Although the greenhouse effect is a natural and beneficial, but the problem occurs when there is human-caused an increase in the atmosphere of greenhouse gases, which increases this effect and produces global warming.
The increased atmospheric concentration of greenhouse gases has been a steady and constant, due to human activity. For example, early in the century by the burning of forests for farmland.
The concentration of carbon dioxide (CO2) has increased in recent decades by use of fossil fuels as an energy source for transportation and industrial processes.
Methane (CH4) is another greenhouse gas and its concentration in the atmosphere is increased by higher mean for treatment of waste in landfills, ruminant digestion, to massively raise them for food, manure management, which together with agricultural fertilizers are also produced significant amounts of nitrous oxide, and to a lesser extent rice cultivation and waste incinerators.
Nitrous oxide (N2O) is also used as propellant for aerosols, in the manufacture of incandescent and fluorescent lamps, etc..
Other responsible for the greenhouse effect as anthropogenic are compounds perfluorcarbonados (PFCs) and hidrofluorcarbonados (HFCs), used in refrigeration equipment, fire extinguishers, and aerosols, as well as sulfur hexafluoride (SF6), which is used as an insulating gas equipment in power distribution.
As an example worth noting that carbon dioxide has increased from 275 ppm before the industrial revolution to 361 ppm in 1996, methane levels have doubled in the last 100 years and the amount of dinitrogen oxide increases by one 0.25% annually.