What is climatic change? 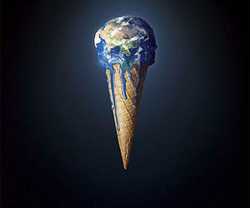 Climate change is defined as a change of climate attributed directly or indirectly tohuman activity that alters wing composition of the global atmosphere and which is in addition to natural climate variability wing observed over comparable time periods.Today is one of the greatest environmental, social and economic changes facinghumanity.
The climate is based on the air circulation of the atmosphere. This movement is acomplex and changing system, which constantly exchanges energy with the sea and land. The weather has been so very different along the planet's history, for example, 10,000 years ago the average global temperature was 4 to 5 ° C lower than today andice covered a large area of the globe globe.
The novelty is not then the weather changes, the real problem is that it changes so quickly that mankind and other living things and life cycles, can not adapt and part of the population, especially the poorest, is beginning to suffer a worsening of living conditions: floods, loss of soil fertility, spread of tropical diseases, desertification, etc..
The rate of warming for the century is much greater than the changes seen so far, it is expected that the average global temperature of Earth's surface increases from 1.4 to5.8 ° C. In Spain the average temperature could rise between 2.5 and 3.5 ° C by the middle of this century.